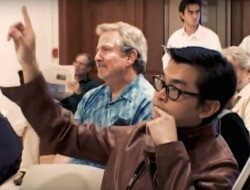 How would you feel if you purchased a fake bottle of wine for thousands of dollars from a man that you considered a friend? That’s the question many in the wine industry found themselves asking after Rudy Kurniawan came into their lives. When Rudy first came into the wine scene, he was a friend to many, and well respected. That reputation took a turn, however, when his empire of fake wine started to crumble. Rudy was arrested in 2012 for his years long wine fraud – a scheme that made him a multi-millionaire and cost others the same. He made his way up in the wine world, participating in auctions and tastings, all while committing the biggest case of wine fraud in the history of wine. Rudy made wine out of his home and sold bottles for thousands upon thousands of dollars masquerading them as a rare Burgundy or other top dollar wines. He made his own fake labels for his own fake wine (I feel like I saw this in an episode of White Collar?!) and built an empire that would make sure he cemented his place in history.

Wine fraud is often viewed as creating a cheaper wine and marketing it as though it’s a nicer wine. Emily Ulrich, owner of Events by Emily and Weddings & Events Director of Crushcakes Bakery and Café, sees wine fraud as “people who replicate vintage or expensive wine with fake or cheap product and sell it as if it were a rare item to gain maximum profit.” In the end, Rudy was using his fake wine to pay back people he owed and using it to fit into a world he desperately wanted to be a part of.

When people first met Rudy back in the early 2000s, they would describe him as young, geeky, and outgoing. But it was his knowledge of wine that separated him from the pack and got people talking. During tastings, Rudy could taste blind and be correct most of the time, which impressed everybody. He made such a good impression on people he met that even today people still have trouble believing he did this. One of those people is Hollywood director Jef Levy. In the film “Sour Grapes” (Rothwell & Atlas, 2016), Levy was interviewed about his relationship with Rudy. Levy said the Rudy was the first person to introduce him to Burgundy wines and that at their tasting parties, they would sometimes break out 100s of thousands of dollars of wine.

Prior to people noticing the discrepancies in the wine, nobody had a reason to not trust Rudy. “He never said something to me that I could look at and find was untrue,” says Corie Brown (Sour Grapes, 2016). Rudy was knowledgeable when it came to wine, there’s no disputing that. (It was this knowledge that helped him when committing fraud.) Not only was he knowledgeable, he was revolutionizing the wine market, specifically, the Burgundy market. Burgundy is described as a wine for obsessives, and that’s what Rudy was.

While people couldn’t second-guess his wine knowledge, there was pause when it came to his background. Nobody knew Rudy’s background or how he came to be able to afford all the wine he could. There were rumors that his family distributed alcohol back in China and that Rudy had a million dollar a week wine allowance (could you imagine?). Though anytime it was brought up or someone asked him about it, he stayed mum. People knew he lived with his mom and had a brother, but that was the extent of what they knew. (This could be because it’s speculated he was able to fund his business with the money his uncles had from their bank heists back in Indonesia…) 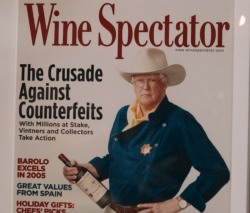 Questions started to arise about fraudulent wine from Laurent Ponsot and Bill Koch. Bill started noticing there were inconsistencies from wines he would get at auctions. Wines would be a certain vintage, but the problem was those wineries didn’t make that wine during that time. He hired an investigator and they started digging into details. They had somebody inspect the wines and would find that there was more than a problem with just the year. Labels of the much older vintages had been glued on with Elmer’s, a product that wasn’t around until the 1970s. In total, he had over 400 fake bottles of wine of which he paid $4 million.

Laurent Ponsot noticed his wines were being fabricated when he saw them through an auction catalog. Wines from his winery were being auctioned off, the problem was the label showed the wine was made in a certain year – that certain year was a year in which Ponsot didn’t even make that wine. Laurent flew to one of the auctions Acker Merrall & Condit had in 2008 to prevent nearly a hundred of his wines from being sold as he believed them to be counterfeit (Steinberger, 2012). He would later become friendly with Rudy, having dinners with him to try to find answers. Rudy gave him nothing but the run around. However, between his investigation and the one from William Koch, it was only a matter of time that Rudy’s empire would come crashing down. 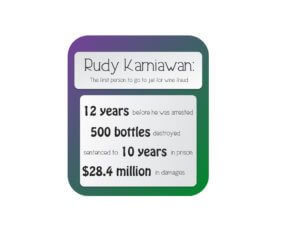 In the early hours of March 8, 2012, the FBI arrested Rudy in his California house. What they found in his kitchen was more than they ever could have expected. They found bottles being soaked in the sink, ready to have their labels removed. There were bottles ready to be re-labeled, corking devices, and “thousands of fake labels for the most prestigious wines from Burgundy and Bordeaux,” (Steinberger, 2012). Authorities also found different papers containing recipes and notes on how to perfect his wine. To be able to recreate fine wines is that of an impressive skill, and Rudy very easily could have been a (legitimate) wine maker with his talents. While some try, there was no denying what Rudy was doing in his kitchen. Rudy was brought back to New York where he was convicted of fraud and sentenced to ten years in prison. He was also ordered to pay back $28.4 million to his victims and US Marshals destroyed 500 bottles of his counterfeit wine, though they may never recover all of his wine. Rudy was the first person to ever be convicted of wine fraud in the United State and his case may very well be the largest wine fraud case in history.

While Rudy was convicted, he is likely not the only person out there committing this crime. “I would not be able to tell the difference between a real and fake bottle of wine, taste nor label,” says Ulrich, and the same can be said for a lot of people who are not experts on the subject. (Even those in Rudy’s inner circle were fooled.) Though we’d like to believe we’d never end up with a bottle of counterfeit wine, there are ways to tell if you’re a little unsure. One of the biggest tells of a counterfeit wine is the year not matching up with the producers’ history. Much like how Laurent found out, if the year doesn’t match up with when the producer made that wine, there’s something going on. Other signs include: the weight of the bottle; an un-aged cork; correct paper for the label; and the type of wax that has been used to seal it. Essentially, everything needs to look like it’s been together for as long as the wine has been around. If the cork has been aged, but the label looks like it was just printed, then you may want to take a closer look at the bottle of wine.

If you’re interested in learning more about Rudy and his rise and fall, you can do so by watching the film Sour Grapes and reading the following comprehensive articles: Vanity Fair; The Gaurdian; Decanter; The New Yorker

To learn more about wine and what goes into making it, join us for a tour by booking here!