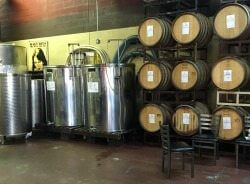 Kingman Winery is an urban Denver winery opened by Doug and Karen Kingman in 2012. They originally started in the Grand Valley area of Colorado when they purchased land, with the idea to grow their own grapes. Though their own grapes had not started growing yet, they purchased grapes from other growers and started making their wine. Eventually, they decided owning land wasn’t the way they wanted to go. Between commuting still from Denver and finding that owning land and growing grapes was too much, Doug and Karen decided to sell their land and open Kingman in Denver.

Doug had wanted a job that he could still do once he retired and opening a winery allowed him to do just that. Though it didn’t work out for them in Grand Junction, Karen says that there have been lasting benefits from being out there. “A lot of the people we buy our grapes from are people we met when we were there,” she explains. The other plus for becoming an urban winery is there are more people to come in and taste. They are able to reach a larger number of people in Denver than they would have in Grand Junction. 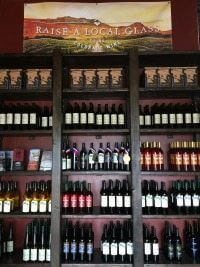 They source their grapes from Colorado (except for their zinfandel) and brought in “50 ton” of grapes last year, according to Karen. The grapes come in during harvest season (the fall) and then they de-stem, produce, and bottle all on site. All of their reserve wines are stored in oak barrels – either French or New American – and then whatever reds they have room for (such as merlot, cab franc, or zinfandel) also go in the barrels. Their white wines, including their chardonnay, are stored in tanks. “Our reserves stay in the barrel for at least a minimum of two years to be called a reserve,” explains Karen. But as far as the other wines go, that simply just depends. Some are in barrels for two years or in a tank for just a few months; there is no time frame but rather they pull them when they need them. Once the wine in the tank is ready, they’ll pump it from one tank to another, clean the tank it was in to remove the sediment, and then pump it back, Karen says. This allows the whites to clarify and not have as much of a bitter flavor.

Kingman Winery prides itself on its box wine – the first box wine of Colorado. They made the decision to start making box wine in January and it hasn’t let them down. Doug says that there were three reasons to start making box wine: 1) appeal to millennials; 2) appeal to the Colorado lifestyle; and 3) get their wine in more bars and restaurants. He found that with box wine, it doesn’t need to be drunk in one night; it can last six weeks. There’s no waste or rush to finish the bottle. It’s also easy to take outdoors and on the go, which caters to those who live their true Colorado life.

But the biggest thing is that they can get it into bars and restaurants. As Doug explains, “Colorado wines have struggled to get into bars and restaurants. Their argument is they’re overpriced. They’re not really overpriced, they’re good wine, they’re competitively priced, but everyone thinks because it’s local, it should be cheap.” Most Colorado wineries don’t producers the volume to sell their wine to restaurants and bars cheap, but boxed wine solves that problem. Getting onto a local wine list is critical for gaining brand recognition among consumers. It allows for customers to learn about Colorado wines at a restaurant and encourages them to go buy them once they’ve tried them.

With boxed wine comes the opportunity for Doug and Karen to continue to build their Kingman brand. People try it in the bar and then they look for it in a liquor store. They now have their wine in liquor stores throughout Denver, as well as Castle Rock and Colorado Springs. Their website contains a list of liquor stores they sell if you’re looking to add Kingman to your wine collection.

If you’re interesting in learning more about Kingman Winery as well as other Denver wineries, book a tour with us!