Prohibition: The Road to the Repeal

Nearly 84 years ago on September 26, 1933, the repeal of prohibition went into effect in Colorado. But before it was repealed, Colorado, along with the other states, had to endure years of being dry. Or so, they had to at least pretend they were a dry state. Through the years of prohibition, people got creative and inventive when coming up with ways to get alcohol. From getting a medical prescription to hiding it in cars while going across state lines, the Temperance Movement never truly succeeded in what it was meant to be. 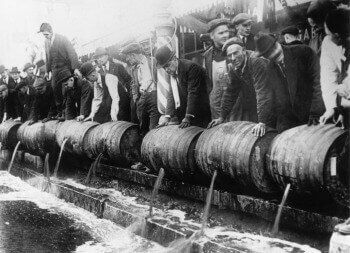 Maine was the first state to pass the first state prohibition law in 1846, and by the time the 18th Amendment went into effect a year after it was ratified in 1919, more than 30 states already had their own prohibition legislation. “The Temperance Movement originally was only opposed to hard liquor and believed that beer, wine and hard cider; all drinks that were a critical part of people’s daily diet and hydration before we were able to reliably sanitize water,” explains Doug Caskey, Executive Director of the Colorado Wine Industry Development Board. But there were other factors that played a role in it: women who thought alcohol was destroying marriages and families, and WWI. “As the US entered WWI, a decidedly anti-German sentiment also infiltrated the Temperance Movement and people began to associate beer consumption with German culture and ideology,” explains Caskey.

The 18th Amendment was meant to ban the manufacture, transportation, and sale of alcohol thus making it near impossible (but not quite) to consume. And with that ban, came enforcement. However, officials quickly learned how difficult it was to enforce prohibition. There were declines in arrests and consumption, but that didn’t stop people from getting creative.

They often found different loopholes to get alcohol, including for medicinal purposes and religion. People were getting prescriptions simply to get small bottles of alcohol that they could drink. According to an article from The Denver Post, A Look Back: 80th Anniversary of the Repeal of Prohibition in Colorado, “Shortly after the law went into effect, the city issued 16,000 prescription forms for doctors, who could prescribe four-ounce doses of liquor for needy patients with each form.” While religion played a part in the Temperance Movement taking shape, it also played a part during. Originally part of the original ban, it wasn’t until 1922 that the making of sacramental wine was no longer banned. And because of that, production rose and people would either resort to stealing or joining a church they had never stepped in prior.

And of course, there were speakeasies and bootlegging. People started making their own alcohol (in their bathtub, no less), known as moonshine, and they illegally sold it when they could. And speakeasies were around like never before. According to The Guardian, “historians estimate that by 1925, there were as many as 100,000 illegal bars in New York City alone, many of them tiny, spit-and-sawdust joints, others catering to the rich and well-connected.” (Here in Denver, there’s the Cruise Room, which opened the day after Prohibition ended.) And often in those speakeasies, you could find people of importance (think high-ranking officials) enjoying a drink with others. That being said, with all the illegal activity of bootlegging and speakeasies, came more organized crime. From that same article in The Guardian, they say, “from the very beginning, criminals had recognized that Prohibition represented a marvelous business opportunity; in major cities, indeed, gangs had quietly been stockpiling booze supplies for weeks.” 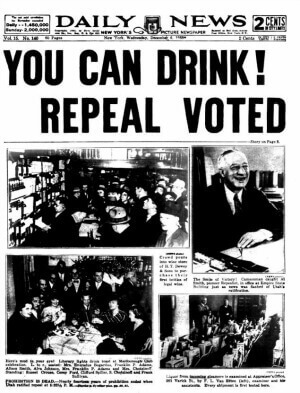 Another side effect of prohibition was its impact on the harvesting of grapes. Unfortunately for wine lovers, the vines that were growing at the time were unlucky. While some states continued to grow their grapes, others weren’t as fortunate. “Many states had wine industries […] such as Ohio, Kentucky that was home to the first commercial vineyard in the country, and Missouri, one of the largest wine producing states at the time.  Most of these states ripped out their grapes as there was really nowhere to sell them,” explained Caskey. But it was only a matter of time until Prohibition was repealed. “Once the country decided that the Great Experiment was a failure at stemming alcohol abuse and that it actually encouraged organized crime, only California and perhaps New York had enough of a grape industry left to produce wine once again,” said Caskey. While some states were able to quickly get back to their pre-prohibition winemaking ways, others took years. This is what happened in Colorado. “[Prohibition] killed the fledgling wine industry in the state, as well as the vineyards planted on the Front Range by European immigrants many working the coal mines and on the Western Slope, where grapes coexisted with peaches and other fruit crops,” explains Caskey.

It wasn’t until the late 1960s, early ‘70s in which wine started to make a comeback. Dr. Gerald Ivancie opened a winery in his cellar in 1968 and hired winemaker Warren Winiarski. Adds Caskey, “Ivancie and Winiarski were instrumental in encouraging Grand Valley fruit growers to try grapes again, so that Colorado would have it’s own grape source. As peach trees had recently suffered a string of bad freezes, grapes offered a welcome diversification for Grand Valley growers.”

Fortunately for us, some great cocktails were created during prohibition or became more popular than they previously had. When your alcohol is illegal, you have to get creative. There’s of course the Sidecar, Old Fashioned, and Southside (supposedly the drink of choice for Al Capone) amongst others. And there was the French 75, named after the 75mm gun the French used during WWI (that should tell you everything you need to know about the drink). If you’re looking to take your drinks back a few decades, here’s an easy recipe for the French 75:

Prohibition was a time in the United States history that we will continue to learn about and imagine “what if.” What began as the 18th Amendment and ended as the 21st Amendment in 1933, Prohibition had people get creative and their impact can still be seen today.