Wineries That Will Wow You

Tasting rooms are no longer strictly tied to being in the middle of a vineyard. They’re evolving much like the wine industry itself. Vineyards themselves are no longer restricted to being in the countryside. And with tasting rooms that are different and vineyards that aren’t the norm, the story that comes with them are usually as good as the wine itself. 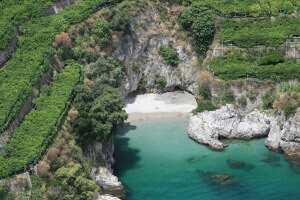 When you think of wine making in Italy, your first thought is usually of Tuscany. And when you think of Amalfi Coast, your mind usually visualizes beaches and Cliffside buildings. But Cantine Marisa Cuomo challenges that vision. Located in the village of Furore, the winery is situated cliffside overlooking the Amalfi Coast. The grapes that grow here are supported by a pergola and cared for by hand. There’s also the added bonus of the grapes getting not just sun but the ocean breeze. This makes for fresh and bold wine. Once the juice is ready for barrels, they go into French oak that’s stored in a wine cellar that was carved out of the rock. Next time you’re looking to try an Italian wine, go Southern. 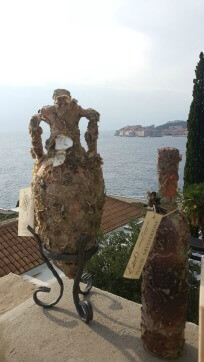 You may have scene a video featuring this winery floating around your Facebook page (pun definitely intended) as one of the hottest wineries out there. Edivo Vina Winery, located in Croatia, has taken the wine scene by storm for the way it stores its bottles – underwater. “Winemaking is a long family tradition, but when it comes to undersea wine the whole project started in 2009,” says Dora Mratovic, Manager of Edivo. After the wine is made it is bottled, but this is where it diverges from your standard winemaking process. “After it has been bottled and placed in a terracotta amphora [essentially a terracotta vase], it is sunken under the sea to the depth of 20 meters. All of them are perfectly stored, laid on its cork and scattered on several locations of Pelješac aquatorium,” Mratovic explained. The wine first ages in the bottle for three months, and then once it’s in the sea, it ages for another year or two. As the wine ages in the sea, it gathers corrals and algae adding the beauty uniqueness that is Edivo. Once the wine is ready, you and an employee can dive down and retrieve a bottle. The wine doesn’t lose anything when it’s underwater aging (such as color or aroma) but gains quality. “Natural cooling in ideal conditions and a perfect silence improve the quality,” says Mratovic. Edivo Vina Winery is a must for all you wine lovers out there. 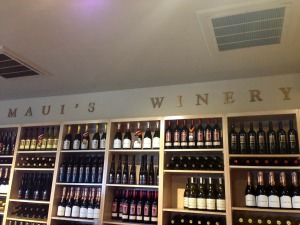 With a location on the slope of a volcano and a tasting room that once served as a jailhouse, MauiWine is unlike any other winery. Open since 1974, MauiWine is Maui’s only winery and has taken advantage of the rich culture and landscape of the island “MauiWine is the Island’s sole commercial winery boasting a varied selection of wines including its estate wines under the Ulupalakua Vineyards label, pineapple wines made from 100% Maui Gold pineapples and sparkling wines made in the traditional Méthode Champenoise process,” says Joe Hegele, Director of Sales and Marketing. The winery itself is located on the southern slope of the Haleakala volcano and looks down onto the ocean. “Ulupalakua Vineyards is draped over a layer of rich volcanic soil and situated between 1,650 and 1,900 feet elevation on the southern slopes of Haleakalā.  Protected by afternoon cloud cover & cool trade winds, 23 acres of Syrah, Malbec, Grenache, Viognier, Chenin Blanc, and Gewürztraminer grows deliberately and requires the constant attention of nurturing hands,” explains Hegele. He continues, “Our long growing season and temperate climate awards the clusters additional hang-time, allowing its fruit to fully develop and display the uniqueness of Ulupalakua’s soil and climate. Harvests are intentionally small including only the very best of fruit, and nothing apart from excellence of flavor, maturity, and structure is considered.” Their main tasting room used to be the guesthouse of the last remaining king of Hawaii, King Kalakaua, and now has the name King’s Cottage Tasting Room. They also have another tasting room that is used for special tastings; it over time has been the office of a whaling captain and its basement was a jailhouse in the plantation era. As Hegele tells us, “The Old Jail received its endearing nickname through stories of the past in the plantation and ranching eras when it was used as a holding place for wrongdoers awaiting transport to the county jail.” In addition to the history that surrounds the lot, they also are known for their pineapple wine. They use Maui Gold Pineapples and take the juice from them and then add it to the stainless steel tanks that are aging the wine. How that got started was merely due to waiting for grapes to mature. “While awaiting the maturity of our vineyard, wine was temporarily produced from what was readily available on Maui – the juice of locally grown pineapples,” says Hegele. This is a perfect place to enjoy wine, history, and the picturesque views of Hawaii. 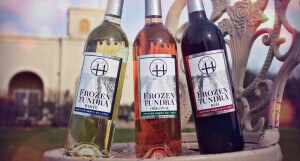 Parallel 44 is located in Wisconsin and was started by Steve Johnson and his wife Maria Milano in 2007 (they also have the winery Door 44 which they opened in 2013). They got the idea to open a winery while on their honeymoon in Napa, but wanted to do it in Wisconsin. “Looking back on when we started, many thought we were crazy to think of making world class wine on the Frozen Tundra where people think of us as the land of snow, football, and beer,” says Johnson, owner as well as winemaker. But they did open in Wisconsin and have since been thriving. They plant grapes that can survive the frozen temperatures and they “have grown from a 2000 case production a year to over 11,000 cases.” And just last week they won the “Winery of the Year” award at the International Cold Climate Competition. As Johnson explains, “Our wines, particularly our sparkling, roses, and whites made from varietals like Frontenac Gris and Lacrescent and our reds made from Marquette and Petite Pearl are really striking a chord with customers and judges, in particular because these varieties and our cool climate highlight very bright acidities and intense aromatics.” Parallel 44 also has a connection to Tuscany, Italy and Bordeaux, France – they’re located on the latitude line of 44 degrees, which also happens to be the same latitude line as Tuscany and Bordeaux. “People are surprised to learn that we are on the same latitude as Italy and France and thus have nearly identical growing conditions from April through October,” says Johnson. He adds, “By planting the right varietals that survive the sub zero temperatures we have the same opportunity to grow and craft regionally stylistic wines along with the great wine regions of Italy and France.” 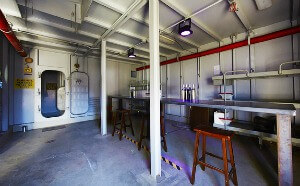 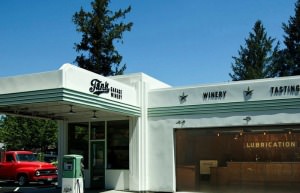 If you come across this place while driving through Napa Valley, at first glance you may think it’s a place to fill up your car. But when you take a closer look, you’ll see that the 1930s era gas station is actually a tasting room. It’s only been open for three years, but Tank Garage Winery is making a name for itself due to its unique style. Though the gas pumps they kept outside are no longer functioning, it still has a garage door that is opened when it’s nice outside. They also have a side room that’s available for private tastings. The names of the wine they serve are as unique as the building itself. They have a “Like You Stole It” red wine with a picture of car on the label or a “Roll the Bones” cabernet sauvignon with dice on the label to name a few. Their wines are available to purchase online, but the true experience is drinking them while feeling like you’re in another decade.

If you’d like to learn more about urban wineries, join us for a tour!