A Glass of Wine a Day Keeps the Doctor Away

They say “an apple a day keeps the doctor away,” but here at Mile High Wine Tours, we prefer the lesser-known saying, “a glass of wine a day keeps the doctor away.” According to scientists and health professionals, drinking a glass of wine a day (and they don’t mean a glass that holds the entire bottle) can have a lasting benefit on your health. These benefits may not have the impact on one person that they have on another, and if you go above the moderate, daily intake, it may hurt you. Moderation is a key in every aspect of life, and that’s no different than wine. 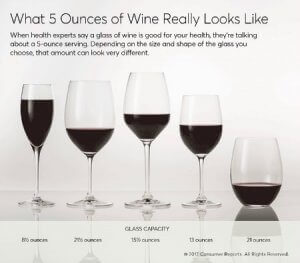 In order to get a better sense of wine and its impact on our health, researchers have studied men and women, drinkers and non-drinkers, over the course of several years. These studies can range anywhere from 16 years or more to less than five, depending on the specific study. For example, researchers studying the heart have longer research period while those researching cognitive function and memory function can do so in an afternoon through a quiz.

Who doesn’t love the idea that drinking wine can benefit your heart health? It sure makes my heart happy. Scientists and health professionals have studied the effects that wine has on your heart for decades. Resveratrol (an antioxidant found in grape skins) and flavonoids are antioxidants found in red wine have been found to be beneficial for your heart. According to the American Heart Association, “Alcohol or some substances such as resveratrol found in alcoholic beverages may prevent platelets in the blood from sticking together. That may reduce clot formation and reduce the risk of heart attack or stroke.” The Mayo Clinic also supports this theory; the antioxidants in alcohol may help prevent blood clots and coronary artery disease, which is the condition that leads to heart attacks. There are also antioxidants in red wine called polyphenol, which, “may help protect the lining of blood vessels in your heart” (Mayo Clinic). It is also believed that the antioxidants raise the level of HDL (High-density lipoprotein)

Cholesterol; this is the “good” cholesterol that removes the bad cholesterol (Low-density lipoprotein (LDL)) from your bloodstream.

Along with the possibility of lowering heart disease, moderate wine consumption can lead to lower risks of stroke, Type 2 diabetes, cognitive awareness, and cancer. As Health Magazine and Tedd Goldfinger, DO, at the University of Arizona School of Medicine, explain, “wine helps prevent clots and reduce blood vessel inflammation, both of which have been linked to cognitive decline and heart disease.” For women, there have been links to lowering your chance of ovarian cancer, and for men, it can lower your chances of prostate cancer. According to Health Magazine, “experts suspect this may be due to antioxidants or phytoestrogens, which have high anticancer properties and are prevalent in wine.” A recent study at the University of Michigan showed that “a red wine compound helped kill ovarian cancer cells in a test tube.” In studies done by Harvard Medical and Amsterdam’s VU University Medical Center, moderate wine drinkers are at a 30-40% less chance of having Type 2 diabetes. “Wine seems to reduce insulin resistance in diabetic patients,” adds Health Magazine. 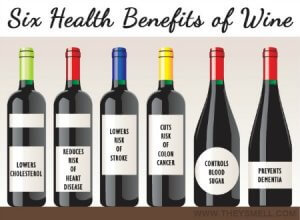 The effect of these healthy benefits is it may lead to a chance of longevity. This isn’t to say that by drinking wine, you’ll find yourself in a Tuck Everlasting situation, but we’ve all seen those interviews with people who reach the age of one hundred and when asked how they got there, they said it was wine.

With all that being said, excessive drinking can lead to an increase risk in all of the above, and a horrible wine hangover the next morning. Steve Allsop, director of the National Drug Research Institute at Calvin University in Australia, has been doing research regarding wine and hangovers. According to an article from the Today Show, Allsop says that congeners (elements in alcoholic drinks that give flavor and color) that have higher levels tend to impact you worse. There are a few different parts of wine that can lead to a bad hangover, specifically with red wine. Red wine usually contains a higher alcohol percentage than white wine; it also contains more tannins than white wine. “Some cheap wines might have added tannins (compounds in grape skins), or synthetic tannins… which can interfere with serotonin levels and make your hangover feel worse,” explained Allsop to Today. So if you’re looking to try to curb that next-morning hangover, try a white wine, one that is lighter in color.

While the government requires a warning on all wine labels that the wine contains sulfites (this is only required in the United States and Australia) they are not as bad as one may assume. According to WineFolly, the government is required to put a warning if the sulfites are above 10 parts per million. If you have asthma, the sulfites are more likely to have an impact on you because of increased sulfite sensitivity. That being said, sulfites are a part of wine; you can’t have wine without sulfites. Sulfites are in the wine to act as a preserver. “Sulfur started to be used in winemaking (instead of just cleaning wine barrels) in the early 1900’s to stop bacteria and other yeasts from growing,” explains WineFolly. However, the amount of sulfites in wine is determined by the wine itself. Wines with more color (such as red wines) don’t need as much sulfur and wines with lower acidity need more sulfites.

Though there are certainly benefits, it’s best to not start drinking simply because it may be beneficial to your health. As with everything we intake, different people will experience different reactions; we recommend reaching out to your doctor before changing your consumption habits. Now don’t get us wrong, we love our wine here and would never discourage your enjoyment of it, just remember: everything in moderation.