I will be the first to admit that when I see it’s a cold, gross day, I want to do nothing more than hunker down and read a good book or watch a movie; leaving my house sounds pretty undesirable. So what’s a better way to pass the time on these less than perfect days than with a glass of wine and movie about wine? Just because the weather isn’t good enough to go out and taste wine, doesn’t mean you can’t bring the wine  and knowledge learned home. There are quite a few movies about wine out there, but I’ve shortlisted my favorites and hope they can make your day a little less dreary. 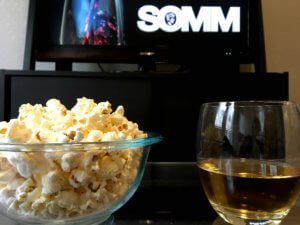 I might be a bit biased in recommending this movie, as it very well may be my favorite documentary and one of my favorite movies. It’s a documentary film about four people who are attempting to become Master Sommeliers – one the hardest tests in the world. According to iTunes, “Somm is the story of four sommeliers attempting to pass the prestigious Master Sommelier exam, a test with one of the lowest pass rates in the world. The exam covers literally anything having to do with the entire world of wine and that is just the beginning.”  It is an incredibly fascinating look into the lives of those whose occupation we know little about, but who in turn have to know everything there is to know about wine. I have seen this film, well, a lot, but I still find it just as fascinating and intriguing as I did the first time.

Somm: Into the Bottle

Here we have another film from the director of Somm, though it is not so much a sequel as it is a follow-up. It answers your questions “where does wine come from?” and “what makes a good wine, good?” According to iTunes, “Viewers are taken beyond the exam and down the wine (bottle) rabbit hole. The world’s most famous winemakers and sommeliers unravel what makes wine the most compelling elixir, a beverage that is uniquely intertwined with the history of mankind.” It’s an interesting look into the drink that gives us so much joy.

This is a bit of a departure from the two previous films, but a great movie nonetheless. An Academy Award winner, this film takes us through the ups and downs of relationships, life, and the wine that will always be there. According to IMDB, “Two men reaching middle age with not much to show but disappointment embark on a week-long road trip through California’s wine country, just as one is about to take a trip down the aisle.” This is just one of those good, solid movies that will always remain watchable and forever quotable.

A Year in Burgundy

Much like Somm: Into the Bottle, this film allows us a glimpse into wine making. It focuses on a specific region, Burgundy, and how the wine we drink is marked by the weather they face. According to iTunes, “In four chapters – Spring, Summer, Harvest and Winter – we follow the fortunes of six winemaking families. This is a deeply human story, with scenes of laughter, fear, surprise and delight. We face the rigors of bad weather with all the growers: devastating hail, vine-killing frost.” Though the other two films in this series are not on this list, A Year in Champagne and A Year in Port, they are definitely worth checking out.

Okay, technically this is a TV show, but it is definitely worth a watch (I may have seen the one season three times, but who’s counting…?) It, like SOMM, follows a group from New York who are in the process of getting ready to take the Master Sommelier exams. According to Esquire, “Uncorked follows six aspiring master sommeliers from New York, as they prepare for the Court of Masters Sommelier exam.” They come from different backgrounds, work different jobs (one even works at Eleven Madison Park) but they all have one goal.

If you’re interested in grabbing a bottle of wine and a snack when enjoying these movies, I’d recommend the following pairings: