When you first walk into the new Colorado winery, Bigsby’s Folly, you’ll notice pictures on the wall of the building from many, many years ago. It’s touches like these that you’ll find throughout as Chad and Marla Yetka look to make Bigsby’s Folly a place you will enjoy and a place you will want to come back to. 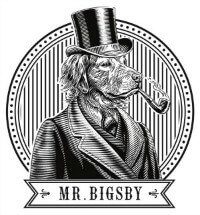 They found the perfect building as their location because it had the history they were looking for. It lived through the prohibition and that is the inspiration they had for their winery. “The idea for the winery and the experience we want people to have when they came to the winery really was centered around prohibition and the 1920s,” Marla said. Added Karen Guido, their Chief Marketing Officer, they also love that people are still really into the 1920s and prohibition. Chad and Marla also wanted to honor their first Golden Retriever, Bigsby. So with the 1920’s and some puppy love, Bigsby’s Folly came to be.

They had always dreamed of opening a winery in Napa, with Chad making the wine and Marla in the tasting room with the customers, but it was the Napa prices that stalled that. They fell in love with Denver and were excited at what opening an urban winery could become. There was also another bonus with opening a winery in Denver – the accessibility. “Being able to really offer the experience to more people than those that could afford to get on a plane and go,” explains Marla. She added that the energy of RiNo just added to their confirmation the location was the right choice. 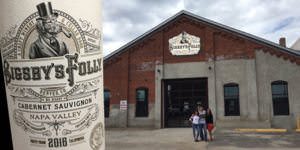 Not only are they going to be a winery, but they will also be a restaurant with a full bar. There’s also going to be two patios – one in the front and one the back – so you can take full advantage of the Colorado sunshine. As Marla told us, they designed the winery so that nothing is bolted to the ground. Things can be moved and events can be had. They will also have a growler program, which they can refill with some of the wine that’s on tap. You can also purchase a travel pouch that will hold a full bottle of wine, which speaks to the Colorado, outdoor mindset.

Based on prohibition, and not being able to sell wine during that time period, one great thing they’ll be offering is the chance to create your own wine and your own label. You’ll get to work with their winemaker, Chris Nelson, and “customers will be able to come in […] they’ll work with all the Bordeaux varietals, those five that go into a Bordeaux blend,” Marla explained. Customers will be able to create their blend, bottle it, cork it, add their own label, and walk away with their bottle the same day they made it. They also encourage customers to buy a case of their own wine, since it’s their own, and they know it’ll be liked.

By doing the create-your-own, they say it comes back to not wanting to be an intimidating environment. “Wine, for whatever reason, is kind of intimidating […] so we want to break those boundaries,” Chris tells us. They also want customers to be a part of the process – to learn more about winemaking. As Chad says, “come in, be a part of it, be the hero or heroine of your own table.”

Now we did not forget about the wine and the winemaking process (how could we ever??), but we felt it deserved its own post, which will be coming next week.